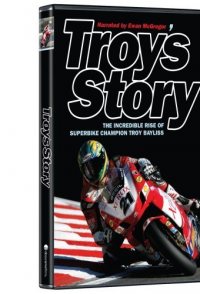 From humble beginnings growing up on wheat farm in outback Australia Troy one day dreamed of racing bikes. At age 23 Troy's life changed forever. He married his high school sweet heart, they brought their first home together, and Troy borrowed nine thousand dollars to buy his first ever road bike. Nine years later he was crowned World Superbike Champion. Troy's riding style is breathtaking and his bin-it-or-win-it attitude has made him a superstar in Europe and across the globe. Narrated by self confessed Troy Bayliss fan Ewan McGregor Troy's Story provides an extraordinary and rare insight into a world championship racing team and remains the definitive behind the scenes expose of racing at the highest level.