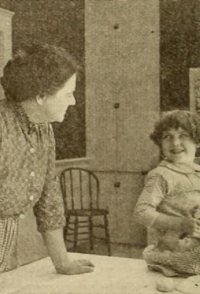 No one seems to understand or love Fay, the little spoiled granddaughter of William Van Loan, a hard-hearted capitalist, but the old family butler, who tells her fairy stories. In Powhatan, a mining town controlled by Van Loan, Bessie, a sweet motherless child of Jasper Hunt, a mine foreman, lives with their housekeeper, Mrs. Flannigan. The mining company raises the price of food stuffs at the only store; the men resent this, and failing to get increased pay, strike. Van Loan refuses to yield and decides to use scab labor. Scenes of violence follow and, compelled to go to Powhatan, Van Loan takes Fay with him. Fay meets and plays with Bessie and for fun they change dresses. Separated, the unusual likeness deceives the Van Loan governess, who supposes Bessie to be Fay and whisks her away. Mrs. Flannigan finds and takes Fay, sick from exposure, to the Hunt home. Business hurriedly recalls Van Loan and mistaken for a changed Fay, Bessie revolutionizes the Van Loan household by her ...