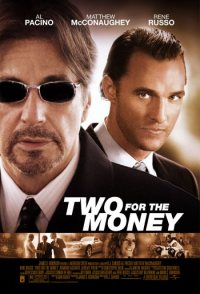 Brandon Lang loves football: an injury keeps him from the pros, but his quarterback's anticipation makes him a brilliant predictor of games' outcomes. Needing money, he leaves Vegas for Manhattan to work for Walter Abrams advising gamblers. Walter has a doting wife, a young daughter, and a thriving business, but he has problems: a bum heart, a belief he's a master manipulator, and addictions barely kept in check. He remakes Brandon, and a father-son relationship grows. Then, things go awry. Walter may be running a con. The odds against Brandon mount.