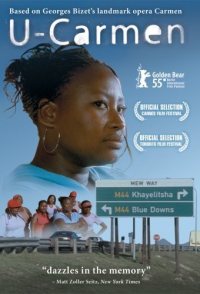 U-CARMEN is a feature film based on Georges Bizet's 19th-century opera that was filmed on location in a modern South African township setting. The energy, compassion, and heat of township life in all its elements create a constantly visually interesting and dynamic background for the unfolding of the story, which owes part of its huge popularity to the thrilling combination of a violent gangster tale with a passionate, almost supernatural love story. As it unfolds, it explores issues of fame and wealth, the position of a strong and independently minded woman in a very masculine society and, perhaps most importantly, the incomprehensible attraction between abuser and victim. Bizet's opera, based on Prosper Merimée's novel, premiered in Paris on March 3, 1875. Set in a poor area of Seville, the story of the magnetic woman who seduces, loves, and ultimately destroys her lover and herself, is well known. Girl (Carmen) seduces boy (Don José), boy becomes completely obsessed, girl leaves ...