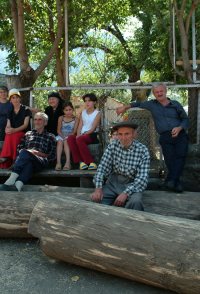 We are in a small village surrounded by high mountains and forests, very close to a famous spa and mineral water springs. The village community is tightly knit. Everybody works on the land, growing potatoes and spinach . One day a rumour spreads - a monster is coming to live there and become their neighbour, it will tear up their land, take their pastures and damage the water supply. This monster - BTC - has been sent here from a very powerful country and has been promised the full support of their president. The village is very anxious.The story of how what was called "BTC-the project of the century" and a small Georgian village became neighbours and how they adapt to each other is a sort of human comedy with echoes of Chekhov and Fellini, but it also sometimes recalls Herbert Wells's "War of the Worlds"