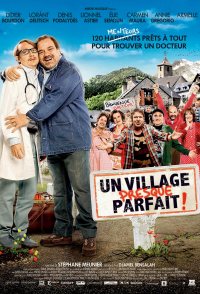 "Saint-Far-la-Mauderne", a small village hit hard by the crisis and desertification. His last hope: revive the salmon smoking factory. Only problem, insurance require the presence of a doctor at home. However, the last retired there more than five years without ever finding a replacement. Germain Behind their gruff but charismatic mayor, residents will do everything to convince the Parisian doctor Maxime Meyer that happiness is in Saint-Far-la-Mauderne.