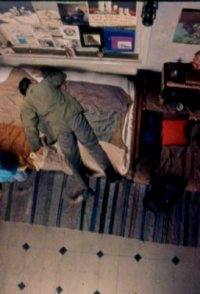 As far as one can remember, water has been dropping from this ceiling. One drop after another, slowly, like an ever-repeating dream that spreads all-over and changes the rhythm of life, creating a partition in-between the internal and the external. One camera for Nidal Debs, another for his hero Marwan, One camera shooting what the other sees. who makes the film?. Marwan lives in Damascus since a long time, since when refugees arrived and filled the city, since hardship was even harder. He & his friends lived those times when life was different, when dreams were bouncing in the streets. Something is happening today, the friends awaken as Ahmad passes away, a life-time of silence has passed, a life-time of frustration and loneliness must end, dreams are searching for a few minutes, for last moments, there is still a little time left. There is a new space today, a space to remember, to convey & to confess, a space for a new attempt to escape. Silent love speaks up today, desire rises, ...