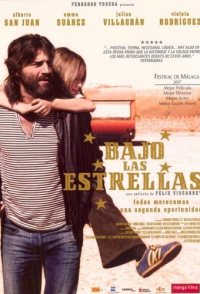 Warning! This synopsis contains spoilers Bajo las estrellas (beneath the stars) features the selfish, opportunistic Benito (Alberto San Juan), a professional trumpet player barely surviving in Madrid, who returns to his home in Navarre when he learns that his father is dying. Benito reconnects with his younger brother, Lalo (Julián Villagrán) a metal sculptor, who is emotionally needy. Benito also develops a surprising bond with the Ainara (Violeta Rodríguez) the young daughter of his brothers girlfriend, Nines (Emma Suárez). He calls Ainara little piggy. A free spirit, Benito is enraged at a television account of an ETA car bombing. While drunk he insults Basque sympathizers and is beaten up. Later a family tragedy provokes the suicide of Lalo. From this Benito chooses to abandon his music career in the big city and insists that Nines and Ainara move in with him.