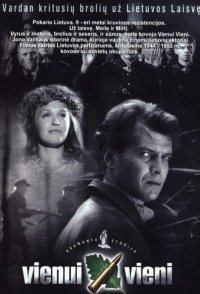 Jonas Vaitkusÿs patriotic war film paints a poignant portrait of Lithuaniaÿs ten-year struggle against Soviet occupation and casts new light on folk hero Juozas Lukða-Daumantas, the legendary partisan who sought to bring Lithuaniaÿs plight to the West. Set in 1950, Utterly Alone powerfully depicts the bloody and brutal treatment meted out by Soviet Russia, aided by Lithuanian collaborators, as it systematically hunts down and kills resistance fighters. Reminiscent of the mood of Schindlerÿs List, it pays tribute to the courage and fortitude of Daumantas and his fellow fighters as they battle valiantly against the might of Stalinÿs empire. Shot in atmospheric black-and-white, Utterly Alone has a documentary feel that only serves to bolster its starkness and the hopelessness of the partisansÿ cause. Utterly Alone is preceded by a short explanatory documentary.