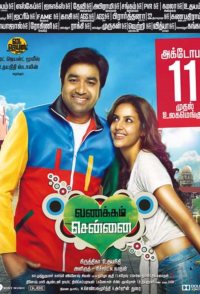 Ajay and Anjali set out to the city of assortment with a varied ambition each and their lives get tied up to one another's inevitably as they get cheated into the same rental accommodation by the comic fraudster Narayanan. With Ajay having come from his native land down south near Theni for livelihood and Anjali having carried her camera along to shoot the south Indian culture, all the way from London, against her father's wishes, the two are forced to stay in the same apartment. They fight and eventually fall in love.