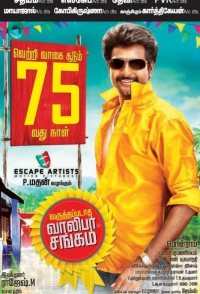 Set in a village called Silukkuvarpatti in Tamil Nadu, the story is about a group of wastrels lead by Bosepandi (Sivakarthikeyan) and his loyal sidekick Soori. Bosepandi is attracted to Kalyani (Bindu Madhavi), a school teacher. He seeks the help of Lathapandi (Sri Divya), a class 12 student in the same school, to deliver love letters from him to Kalyani. As time goes by, Kalyani gets married to someone, leaving Bosepandi heartbroken. Meanwhile, Lathapandi's father arranges for her wedding, but she is still a minor. When Bosepandi comes to learn about the marriage, he seeks the help of police to stop the teen marriage. When the wedding is called off, a relieved Latha falls for Bose. What happens between Latha and Bose? This forms the rest of the story of the film.

The Theory of Everything
Total votes: 392,750
Average rating: 7.7
Switch to mobile version