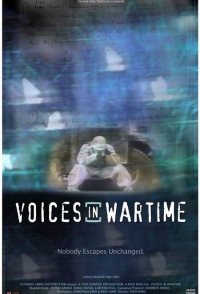 VOICES IN WARTIME is a feature-length documentary that sharply etches the experience of war through powerful images and the words of poets - unknown and world-famous. Soldiers, journalists, historians and experts on combat interviewed in VOICES IN WARTIME add diverse perspectives on war's effects on soldiers, civilians and society. In VOICES IN WARTIME, poets around the world, from the United States and Colombia, to Britain and Nigeria, to Iraq and India, share their views and experiences of war that extend beyond national borders and into the depth of the human soul. The film also brings to life how poetry and war have been intertwined since the beginning of recorded history - from ancient Babylonia and the fields of Troy - to the great conflicts of the 20th century and the current war in Iraq. The stirring words of poets of the past - Homer, Wilfred Owen, Siegfried Sassoon, Emily Dickinson, Langston Hughes, Walt Whitman and Shoda Shinoe from Hiroshima are combined with more recent ...