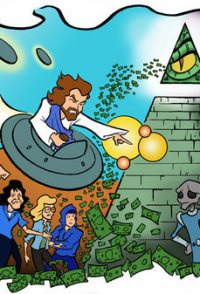 Shot on location in Utah in the months between September 11th, 2001 and the start of the war in Iraq, WAITING FOR NESARA documents the true story of The Open Mind Forum, a messianic group of Salt Lake City ex-Mormons, and the radical faith that binds them together in the wake of 9/11. The group anxiously await the implementation of NESARA - a miraculous secret law hundreds of years in the making - that they believe was blocked and covered up by the Bush administration. The group believes that the 9/11 attacks were Bush's first attempt to delay NESARA's implementation, and that the Iraq war will be his second. Guided by constant internet updates from New Age gurus, the group believes NESARA will abolish the IRS, remove George Bush from office, expose him as a reptilian alien, distribute millions to the worthy few, and install a UFO-flying Jesus Christ as America's new leader. As the deadline for Bush's War on Iraq approaches, the group struggles to remain united, positive, and retain a...