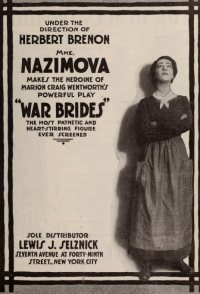 Joan is loved by a young man of the village and they are married. In a few weeks the husband, a soldier, is sent to the war-front along with his three brothers. Word is received that her husband has been killed in battle and Joan's first impulse is suicide by she is pregnant and her prospective motherhood makes her realize her new responsibility. The military authorities start a movement to get the young women of the country to marry departing soldiers, so that the empire may have another generation of fighting men. Word is received that the King is to pass through their village and Joan organizes the women in a general protest against the war. She leads them all, dressed in black, in a long procession to meet the Monarch. The soldiers threaten to shoot her unless she turns the women back, buy Joan comes face-to-face with the ruler and kills herself, as her message from the women that they refuse to make another generation victims of a ruthless militarism.

Fantômas: In the Shadow of the Guillotine
Total votes: 1,922
Average rating: 7.0

The Outlaw and His Wife
Total votes: 1,506
Average rating: 7.2
Switch to mobile version