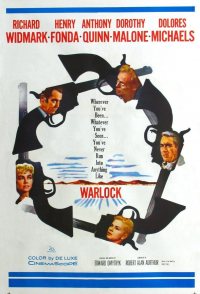 In the small frontier mining town of Warlock, rancher Abe McQuown's gang of cowboy cutthroats terrorize the peaceful community, humiliating the town's legitimate deputy Sheriff and running him out of town. Helpless and in need of protection, the townsfolk hire the renowned town tamer Clay Blaisdell, as unofficial Marshal, to bring law and order to the town. Clay arrives with his good friend and backup Tom Morgan. The two men stand up to the ranch gang and quiet the town. Johnny Gannon, a former member of the ranch gang is bothered by the gang's actions, reforms and takes on the deputy Sherrif job while his brother remains part of the gang. The addition of the official lawman to the mix further complicate matters, leading to an inevitable clash of the cowboys, the townsfolk, the gunslingers and the law.