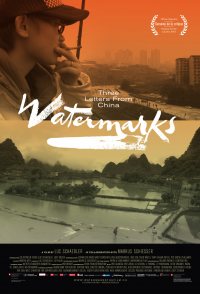 Based on three different places, the film portrays the infractions to which people living in modern day China are subjected due to rapid developments: in the deceptively idyllic Jiuxiancun in the rainy south; in the apocalyptic coal mining site of Minqin and Wusutu in the parched north; and in Chongqing, the mega city on the Yangtze River. The protagonists give their moving accounts of an unresolved past, an uncertain present and their tentative steps into the future. The film thus paints a complex image of the mental state of the people in this complicated country. "Watermarks" is a subjective snapshot in time that takes a poetic look at the changing everyday life in China.