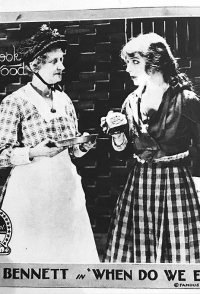 Impersonating Little Eva in a third-rate travelling production of Uncle Tom's Cabin fails to earn Nora enough for a square daily meal, and to make thing worse, her stage career comes to a sudden end when the sheriff arrives with a writ of seizure. Nora hops a passing freight but is frightened by a tramp, jumps off, and literally rolls into the town of Wattelville. After being arrested as a suspicious character, Nora is adopted by the kindly Ma Forbes, whose son James works in the local bank. "Pug" Hennessy and "Soup" McCool, two crooks, inveigle the scrupulously honest James into a poker game and, as a result, he is forced to steal $300 from the bank to cover his losses. Impersonating expert safe-cracker Velvet Mary, Nora helps the crooks to break into the bank, but upon opening the safe, she sounds the alarm, and the crooks are arrested. Having learned his lesson, James proposes to Nora, who never again is forced to go hungry.