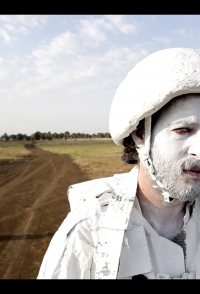 Yuda Braun (28) 'The White Soldier' recruits Matan Goldberg (26) to be his second in command. Together they embark on a quest along the Israeli-Palestinian conflict, while asking questions regarding what it means to be a soldier. Both were in elite combat units in The IDF, and are 2nd generation to settler families. The image of the White Soldier gains its power as an action that mirrors what it means to be an Israeli soldier. Yuda's conflict and pain, as a soldier that during his service went through the disengagement from Gaza, the second Lebanon war, to him being part of the settler tribe, emerges during his quest as the white soldier