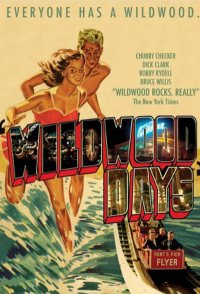 WILDWOOD DAYS is the pop culture history of a quirky rock 'n roll resort of neon-lit motels being threatened by a wrecking ball - as told by Bruce Willis, Dick Clark, Chubby Checker, Bobby Rydell, legendary radio personality Jerry "The Geator" Blavat, and others. Far from the world of bland, impersonal chains, Wildwood welcomes you to 50's and 60's motels with names like the Astronaut, the Eden Roc and the Bonanza - or whatever was new and exotic at the time. It's also home to the country's biggest boardwalk and a rich musical history. Once dubbed Little Las Vegas and The Birthplace of Rock 'n Roll, it was the first place Chubby twisted and Bill Haley and His Comets rocked around the clock. There are Marble Tournaments, Baby Parades and plastic palms, Wildwood's official tree. Dick Clark hosted dances at the magical Starlight Ballroom. Bobby Rydell immortalized it in song, and a young Bruce Willis tended bar and won disco dance contests. Wildwood also has an incredibly loyal following...