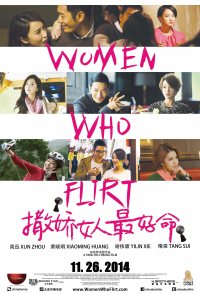 Most women know that flirting can sometimes be the most effective way to get what they want, especially when it comes to men. However, flirting is an art that takes talent, and isn't so easy to come by for some... Zhang Hui (Zhou Xun) has a crush on her fellow classmate, Xiao Gong (Huang Xiaoming). However, family pressure to succeed forces him to focus more on his studies rather than relationships, delegating Zhang Hui to the role of "just - friends". But Zhang Hui doesn't give up that easily. After graduation she finds work in Shanghai in order to stay close to Xiao Gong. Matters are complicated, however, when Xiao Gong returns from a business trip to Taiwan with a new girlfriend, Bei Bei. Unable to admit defeat, Zhang Hui seeks the help from a college classmate and her group of friends that have mastered the art of flirting. Overnight, Zhang Hui's appearance, demeanor, and silks of seduction improve dramatically. As Xiao Gong begins to take notice, their relationship begins to ...