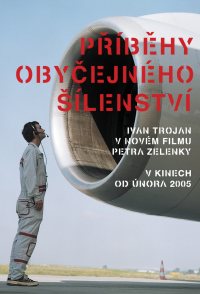 A black comedy based on director Petr Zelenka's successful stage play. It treats a simple theme: Jana has left Petr (Ivan Trojan), a boy 'who's not doing very well at the moment,' and he wants her back. In a film in which love seems like madness (and vice versa) many bizarre things rise to the surface. Petr's mother (Nina Divísková) sends blood to Chechnya. His father (Miroslav Krobot) once did voice-overs for newsreels and his wife forces him to dial a random telephone number in order to find out if people still recognize his voice. Petr's boss (Karel Hermánek) prefers a shop window mannequin to his own vivacious wife, the neighbors enjoy sex only if someone is watching them, and Petr has such lovely eyes... When things in his apartment start to liven up, Petr feels like he's going insane. Or is he the only normal one? Maybe everyone else around him is losing it.