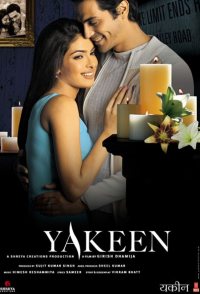 The film begins with the recovery of Simar (Priyanka Chopra) and her husband Nikhil (Arjun Rampal) from a car accident. Simar is almost unscratched but Nikhil not only has major internal and external damage, but he also has amnesia. Simar is determined that Nikhil will get better and resume his life, and immediately begins by bringing in the best surgeons to reconstruct his damaged leg and face, and then later helping him with the hospital therapy. Although Nikhil is at first cautious and wary, Simar's obvious love and dedication wins him over. After six months of therapy he's released from the hospital and the couple return home. Simar insists that Nikhil continue with his life and encourages him to go back to work, though beforehand she warns him that there are both good and bad people all around, and it's up to him to decide whom to trust. Once Nikhil meets up with his old friends and goes through his personal files, he finds evidence that all was not well in his previous life. Now...