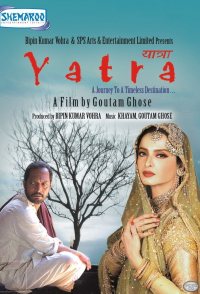 Yatra is a journey of a person whose claim to fame is interrupted by his past which comes in the way of his present. Yatra comes across a strong subject that of a prostitute and its presence in the minds of the people. Dasrath Joglekar is a renowned writer on his way to Delhi to receive the prestigious Literary Award. On the way, he meets one of his ardent fans Nakul Vaid, who is a filmmaker by profession and is devoted to Dasrath's pieces of writings. They discuss about the novels that Dasrath has written and dig the past by striking a conversation about one of his famous novel's Janaza. Lajvanti is a prostitute and Janaza is all about her. After receiving the award, Dasrath moves on to explore the life of Lajvanti yet again. He starts for his hunt without informing anyone from his family. As far as Dasrath's memories go, Lajvanti used to perform mujras in Mehndi Galli. People from every part of the society used to assemble here to blow away their part of naughtiness. Time has ...