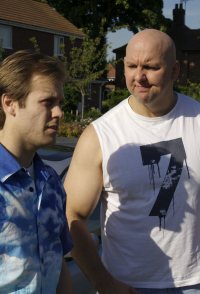 In a small town in England, there is a murder. A journalist quits his job; a bouncer is fired for "bouncing"; and a girl is jilted at the altar. These seemingly random events spiral together when the three accidentally meet each other in the pub, and someone was listening. Now all three are entangled with a beautiful widow, a suitcase full of money, an ever-increasing body-count and a dubious pint of semi-skimmed. Will the bouncer get his hands on the money? Will the bride ever find out what happened to her husband-to-be? Will the journalist survive a murder case he's not supposed to be investigating?