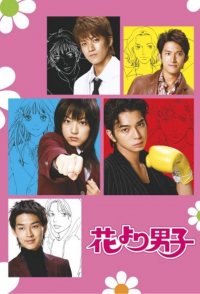 Makino Tsukushi, coming from a humble family of reduced income, feels out place at Eitoku Gakuen, a school largely attended by the progeny of the most rich and powerful people of the country, so she's determined to draw as little attention to herself as possible and pass her high school days without incident. She's specially cautious of staying out of the way of the F4, a group made up by the four richest boys in school and that rules over the entire student body by intimidation and bullying. However, when her one friend at school manages to draw the ire of the leader of the F4, Domyoji Tsukasa, Makino jumps in to defend her friend and confronts him. By doing so, she not only becomes the newest target of Tsukasa's anger, but also, and unexpectedly, the focus of his interest. This, just as Makino was starting to have feelings for the enigmatic Hanazawa Rui, another member of the F4 and close friend to Tsukasa, marks the end of her quiet and untroubled days and turns her life into the ...