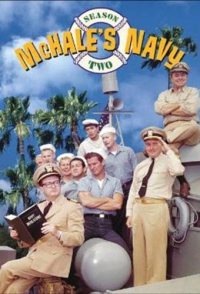 These are the adventures of the misfit crew of PT-73 during World War II. They're one of the best fighting crews in the Navy, but break regulations when it suits them. Their commander, Lieutenant Commander McHale, is at times as roguish as his crew, but he puts his foot down when things go too far. They are assigned an Executive Officer, Ensign Parker, who is by-the-book, but too much of a klutz to command too much respect. They have a house-boy Fuji, who deserted the Japanese Navy, who wears a POW outfit, just in case he's caught, so he won't be shot at. Their nemesis is Captain Binghamton and his aide Lieutenant Carpenter. They're initially stationed in the South Pacific, but moved to Italy in the last season.