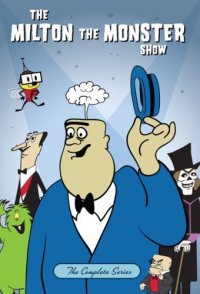 Seven different cartoon stars appear in their own series of animated shorts each week. "Milton the Monster": Professor Weirdo, the mad scientist, and his assistant, Count Kook, live on Horror Hill with the three monsters they created: Heebie (a skull-faced monster with long hair and formal dress), Jeebie (a green-furred creature with one eye and one sharp tooth) and the uselessly kind and gentle Milton the Monster. "Fearless Fly": Hiram is a meek, mild and passive little fly until he dons a special pair of eyeglasses that give him super-powers. The inscrutable Tibetan wizard, Doctor Goo Fee, and his faithful servant, Gung Ho, make every effort to destroy the super-insect. "Flukey Luke": The cowboy private eye, Flukey Luke, fights the mobster, Spider Webb, with the help of his trusty horse, Pronto, and his faithful friend, Two Feathers, the American Indian with an Irish accent. "Muggy-Do, Boy Fox": The wily boy fox has an endless number of schemes to make a dishonest buck. "Penny ...