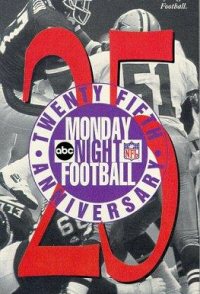 "Are you ready for some football?!" That six-word lyric, as bellowed out each week by country music superstar Hank Williams Jr., preluded each "NFL Monday Night Football" game, the first successful attempt to air a National Football League (NFL) football game in prime-time. Each week, two teams (as chosen months in advance by the NFL) met in what has become a Monday night tradition. Usually, a trio of sports-casters (a play-by-play announcer joined by a color commentator and an analyst) called the action. Half-time interviews with coaches and players, and sideline reports after outstanding plays were also innovations that contributed to the appeal of these games. Many of the games proved to be exciting, though sometimes the games were boring (especially if the teams were a mismatch or not very good, a necessary risk since the games were scheduled months in advance). Often serving as part of the announcing team were former NFL greats including OJ Simpson, Dan Dierdorf, Joe Namath and ...