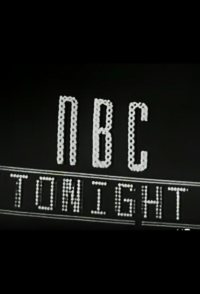 The show originated as a local New York City late night program in June 1953 and went onto the network in September 1954. Throughout the summer of 1956, Steve Allen was the only host. When Allen's prime-time series debuted in the summer of 1956, he limited his appearances on this show to Wednesday through Friday and a series of guest hosts filled in until 1 October 1956 when Ernie Kovacs took over as permanent host for the Monday and Tuesday broadcast. Kovacs had his own set of entertainers, i.e., Wendell, Hanley, Arthur and Loden. The last show was broadcast on 25 January 1957."Tonight's" first monologue was given with Steve Allen seated at the piano: "In case you're just joining us...this is Tonight...and I can't think of too much to tell you about it, except I want to give you the bad news first: this program is going to go on forever. I wouldn't call it a Spectacular....you might say it's more a Monotonious ."

Directors: Barry Shear, Dwight Hemion, William O. HarbachWriters: Ernie Kovacs, Herbert Sargent, Mike Marmer, Stan Burns, Steve Allen, Sylvester L. Weaver Jr.
Search for articleSearch for trailerSearch for everything
Hint: you can examine a particular season more clearly on the graphs if you disable the trendline and all other seasons (via clicking on their labels).