All the Invisible Children ratings (Movie, 2005) 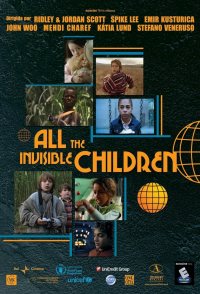 Seven shorts about childhood problem through the eyes of seven directors. 1) "Tanza": Mehdi Chafer shows a boy called Tanza in an undefined country in Africa fighting in a civil war with machine gun and explosives, and dreaming on having his home and going to school. 2) "Uros": Emir Kusturica shows a gypsy boy called Uros in his last day in a juvenile prison in Serbia-Montenegro without any other perspective but returning to the place. 3) "Jesus Children of America": Spike Lee shows a HIV positive girl called Blanca, daughter of junkies' parents with Aids and the cruelty of her schoolmates in school. 4) "Bilu and João": Kátia Lund gives an optimistic approach of two homeless children that fight to survive working on the streets, collecting beer and soda tins and paper to sell in a junkyard, and transporting shops in street fairs. 5) "Jonathan": Jordan and Ridley Scott show a photographer correspondent of war in pain for his past experiences. 6) "Ciro": Stefano Veneruso shows a young ...

There Will Be Blood
Total votes: 507,157
Average rating: 8.2
Switch to mobile version