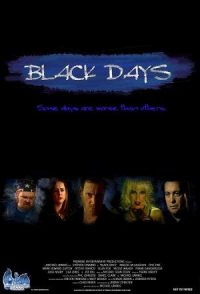 BLACK DAYS takes place on the gritty streets of Chicago where Trent, a recently released ex-con, struggles with alcohol and loneliness. Before going to jail Trent tries to help Angie escape prostitution by giving her the money to get out, but money in the end just wasn't enough. Now Trent is out on parole and Angie's friend Melanie wants to escape the same life, not only for her, but for her son as well. Seduced by the temptations of the flesh and the echoing guilt of not doing more for Angie, Trent tries to do the right thing and get Melanie out. But when Trent tries to buy Melanie from her pimp things get violent and promptly spins out of control. Before he knows it Trent is being hunted by Eddie, an old enemy seeking revenge, and his previous employer tries to have him killed. Slowly but surely we see why Trent served hard time. Only Trent's the last person in the world you would want to mess with.