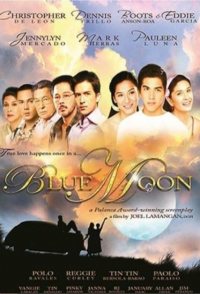 Can a love that bloomed under a Blue Moon truly last forever? At a quiet home in Boston, Massachusetts, an elderly Filipina named Corazon is writing a love letter. Knowing she doesn't have much time left, Corazon is writing to every man named Manuel Pineda who's listed in the Philippine directory, identifying herself as his long-lost love. In the Philippines, an elderly man named Manuel Pineda is diagnosed with cancer, and told he only has a few months to live. Manuel decides that before he dies, he wants to find the woman he loves most, whom he hasn't seen in decades: Corazon. "Blue Moon" follows Manuel's daunting search for Corazon all over the Philippines. He's joined by his emotionally distant son Rod and recently-separated grandson Kyle. As Rod and Kyle accompany Manuel in his search for his lady love, they discover that there were actually two ladies named Corazon in Manuel's life: the nurse whom Manuel married after World War 2, and the spunky girl who was Manuel's first love ...