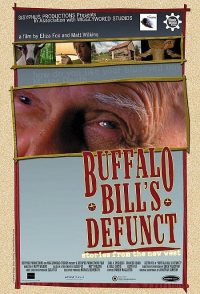 Buffalo Bill rallies his sissy-fied clan to the old-fashioned task of pulling down their dilapidated shed with a winch and 100' of cable; a half-baked decision influenced heavily by the fact that he accidentally blasted through the garage door with his truck. As Bill's daughter and grandchildren prepare the shed for razing, they excavate rusted family artifacts, uncovering interfamilial tensions. In their own words, Bill's ensemble gossips about each other, most of the time revealing more about the person talking than the subject. The film spills the guts of this American family through stories of Bill's seeds floating through the world on their own unique, but parallel narratives. "Buffalo Bill's Defunct" is a poem to the entanglement of family, casting a vigil light on inheritance. The relationships are cluttered, muddled and imperfect, but perfectly functional.