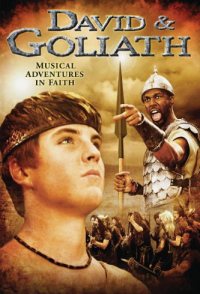 See this fun and moving Bible story (1 Samuel 16-18) as you've never seen it before -- through the eyes of Amelia (Lauren Faber), a shy, modern-day girl who has her own personal Goliath to face -- a performance in her school's choir concert. To help build Amelia's confidence, her choir teacher (Angela Winston) tells her the story of another young person called upon to do something big - a boy by the name of David. David and Goliath is the fun and moving story of the well-known Biblical figure, King David as he takes on the mighty Philistine, Goliath. David and Goliath is enjoyable for the whole family. Thurl Bailey, recording artist, popular public speaker, sports broadcaster, and former NBA star, takes on the role of Goliath in this exciting family adventure. David and Goliath also introduces Spencer Forsey as David, and features all new original music. David and Goliath is sure to be a favorite addition to your family's DVD library!