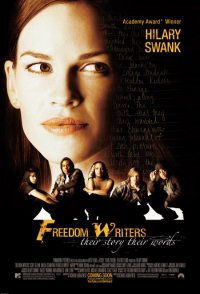 It's 1994 in Long Beach, California. Idealistic Erin Gruwell is just starting her first teaching job, that as freshman and sophomore English teacher at Woodrow Wilson High School, which, two years earlier, implemented a voluntary integration program. For many of the existing teachers, the integration has ruined the school, whose previously stellar academic standing has been replaced with many students who will be lucky to graduate or even be literate. Despite choosing the school on purpose because of its integration program, Erin is unprepared for the nature of her classroom, whose students live by generations of strict moral codes of protecting their own at all cost. Many are in gangs and almost all know somebody that has been killed by gang violence. The Latinos hate the Cambodians who hate the blacks and so on. The only person the students hate more is Ms. Gruwell. It isn't until Erin holds an unsanctioned discussion about a recent drive-by shooting death that she fully begins to ...