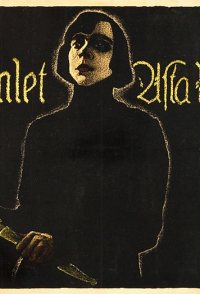 Danish silent movie-star Asta Nielsen formed her own production company to make this film, in which new elements are combined with features (and a few lines) familiar from Shakespeare's version of the legend. The most important of these changes sees Hamlet made into a female character - a princess forced to masquerade as a man by her scheming mother; from this follows Hamlet's secret passion for Horatio and rivalry with Ophelia for his love. Queen Gertrude is here presented as conspiring in her first husband's murder, and the old king's ghost does not appear - young Hamlet merely hears a voice from the tomb and (apparently) dreams of him. In addition, Hamlet now kills Claudius (in a fire) immediately upon returning from Norway with an army led by old school- friend Fortinbras, and it falls to Gertrude to engineer Hamlet's death in the fencing match as well as kill herself by accidentally drinking the poisoned wine.