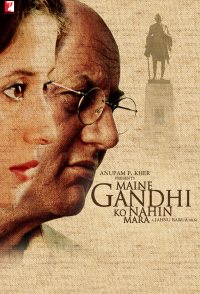 Widowed Uttam Chaudhary lives a comfortable lifestyle with his college-going son, Karan, a daughter, Trisha, who is in love with a South-Indian youth named Ashish Reddy, and an elder son who is married and works in the United States, through whose income the Chaudharys live on. Uttam is a Lecturer, but when he starts getting old, becoming forgetful, he is asked to retire. He is very close to Trisha, who looks after him. The first major episode Trisha's experiences in her father when he announces that he is getting ready to go to work and asks for his wife to bring him breakfast. Thereafter, things get worse, especially when Ashish's parents come to meet the Chaudharys. It is here that Uttam babbles on inexplicably about being responsible for killing Mohandas K. Gandhi. Trisha must now find out if her dad was in any way responsible for Gandhi's death, and what exactly triggered his long-suppressed memory in her dad's mind, and at the same time must come to terms that his disability may...