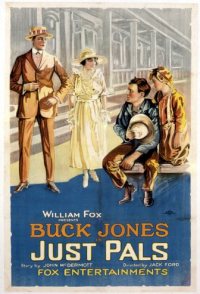 Bim is the town ne'er-do-well, lazy and shiftless, living a catch-as-catch-can existence. He feels no shame about his tattered clothing and seems impervious to the derision and ridicule he endures from his fellow citizens in his rural, early 20th Century village. Despite this, Bim is a kind-hearted soul, and that becomes very apparent when he rescues a young runaway from a beating by a railroad cop at the expense of being beaten himself. Young Bill reciprocates Bim's kindness and has to endure taunting and abuse from the school bully to defend his 'pal.' Bim wants Bill to rise above his station and encourages him to bathe and attend the town's modest one-room schoolhouse presided over by pretty schoolmarm Mary Bruce. She is being courted by the outwardly respectable bank clerk Harvey Cahill, who has embezzled funds from his employer and ungallantly presses the kind-hearted Mary into lending him the school memorial fund money she is entrusted with to cover the shortfall for the bank ...