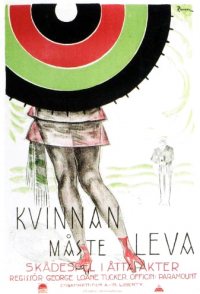 Schooled by her wealthy brother-in-law, William Hollins, Christine Bleeker plans to marry Ralph Lincourt when he is divorced. He, however, is equally pursued by Nancy Barron, whom Christine dislikes. Ned Klegg loves Barbara, a social secretary, and resents the attention paid her by Barron, Nancy's elderly husband. Nell Martin, a servant in the Hollins home, is in love with the gardener but is persecuted by the butler. Mulvain, an aviator, and his mechanic, Le Prim, arrive; and the latter absconds with Nancy in an auto, pursued by Mulvain and Christine, who force him to release her. Christine announces her engagement to Mulvain, who declares he is a poor man. In the resulting commotion, it transpires that Nell, threatened with exposure, has drowned herself. The shock brings a change of emotion: Barbara rejects Barron and accepts Klegg, and Christine accepts Mulvain, content to share his poverty.