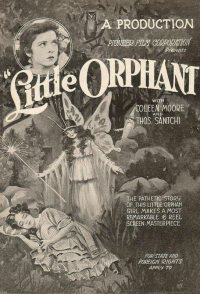 Surrounded by a group of children, poet James Whitcomb Riley narrates the story of Little Orphant Annie, who loses her mother at an early age and is sent to an orphanage. Annie charms the other children with her stories of goblins and elves until her uncle comes to claim her. He and her aunt force Annie into a life of drudgery, treating her so cruelly that Big Dave, a neighboring farmer, takes her from them and places her in the charge of the kindly Squire Goode and his wife. Big Dave, who intends to marry Annie, is called away to fight in World War I. When Annie hears the news that he has been killed, she pretends to be gravely ill but wakes up to learn that it has all been a dream.