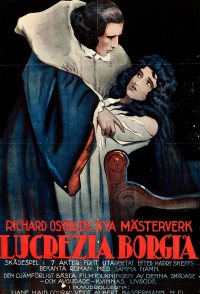 Rodrigo Borgia, Pope Alexander VI, has three adult children: Juan, who is virtuous and has a sweetheart who is a woman of the people, Lucrezia, who is virtuous and wants to marry Alfonso, and Cesare, who is wicked and lusts after Lucrezia, Juan's girlfriend, and probably others. Cesare has vowed to kill any suitor for Lucrezia's love, and he has three thugs to carry out his wishes. Bodies fall into the Tiber, into the Colosseum (with lions prowling), and onto the Vatican floors.