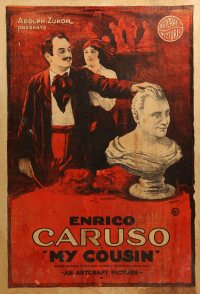 Sincere but struggling sculptor Tommasso (Caruso--bushy moustache, gawky) works in an ornamental plaster shop, but his masterpiece on the side is a bust of his cousin Caroli (Caruso--no moustache, polished), who is the Metropolitan Opera's leading tenor. Tommasso hopes to marry his model Rosa, but her father, restaurant owner Pietro, wants her to find someone more settled and money-conscious, such as the greengrocer Lombardi down the street. Tommasso, he says, throws away his money, such as for a pair of tickets to take Rosa to the opera to see his famed cousin. After the opera, the cousins cross paths in the swanky Galeotto's restaurant, but when neither recognizes the other, Tommasso is generally mocked and Rosa believes him a liar and unworthy. Tommasso must recover his reputation and make a sale, preferably the Caroli bust to his cousin, in order to win Rosa back.

A Man There Was
Total votes: 1,485
Average rating: 7.4
Switch to mobile version