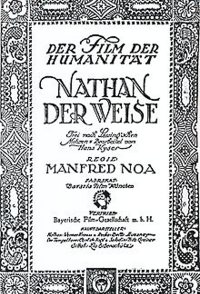 One of the main works of the Age of Enlightenment, a powerful plea in favour of tolerance, humanity and freedom of opinion. Set in the age of the crusades, it deals with the relations between the three monotheistic religions. Lessing includes the historical figure of Sultan Saladin, the Jewish merchant Nathan is a portrait of his friend, the renowned philosopher Moses Mendelssohn - when the play was published in 1779, this was considered breaching a taboo.