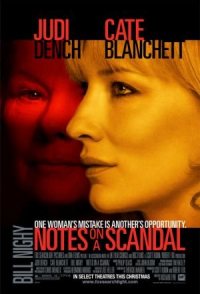 Bitter, cynical, and lonely Barbara Covett (Dame Judi Dench) is a tough and conservative teacher, near to retirement, who is loathed by her colleagues and students. In the loneliness of her apartment, she spends her spare time writing in her journal, taking care of her old cat Portia, and missing her special friend Jennifer Dodd. When Sheba Hart (Cate Blanchett) joins the high school as the new art teacher, Barbara dedicates her attention to the newcomer, writing sharp and unpleasant comments about her behavior and clothes. When Barbara helps Sheba in a difficult situation with two students, the grateful Sheba invites her to have lunch with her family. Sheba introduces her husband and former professor Richard Hart (Bill Nighy), who is about twenty years older than her; her rebellious teenager daughter Polly (Juno Temple); and her son Ben (Max Lewis), who has Down's Syndrome. Barbara becomes close to Sheba, but when she accidentally discovers that Sheba is having an affair with ...