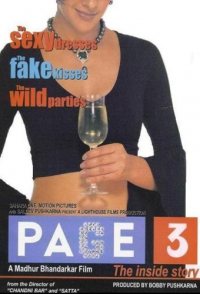 Madhavi is a newspaper journalist in Mumbai whose task is to fill the Page 3 column. Her job consists of attending parties among the socialite and small-time celebrity circle and reporting on it. Her roommates are Pearl, an air-hostess who wants to marry a rich man and settle down to a life of comfort; and Gayatri, a struggling actress. Gayatri is seduced by a leading married actor Rohit Kumar. When she finds out that she is pregnant, he advises her to abort the baby. Dejected, Gayatri tries to commit suicide but Madhavi and Pearl save her. She loses the baby and leaves Mumbai. Madhavi's job of interacting with shallow high-society people is depressing her. She wants to do some substantial reporting for a change, so she is assigned to the Crime beat alongwith veteran reporter Vinayak Mane.