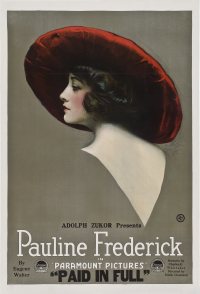 Joe Brooks a bookkeeper, embezzles over $16,000 from his employer, ship owner Captain Williams, who is fond of Brooks' wife Emma. Jimsy Smith, who also admires Emma, discovers the theft. When Joe realizes he has been found out, he convinces Emma to talk to the captain and cancel the debt at any price. Jimsy arrives at first and offers to pay off the debt, but is refused. To Emma, the captain agrees to give a receipted bill for the debt if she will sacrifice her honor. Emma's horror over the proposition convinces the captain that she has had no part in the scam, and he gives her the receipt as a token of his respect. When Emma gives Joe the receipt, he turns on her, believing that she compromised herself. Joe tries to choke Emma when she tells him she is leaving him, but Jimsy arrives and prevents the murder. Emma then goes off with Jimsy, and Joe commits suicide.