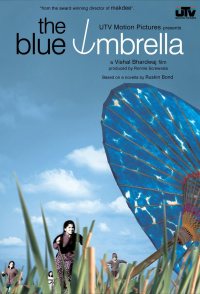 Young Biniya lives a poor lifestyle in a small village in the mountainous and snowy region of Himachal Pradesh in India along with her widowed mom and wrestler brother. She entertains various tourists, and while doing so with some tourists from Japan, trades in her bear-tooth amulet with a blue umbrella. She and her umbrella become very popular with both tourists and the local villagers. A restaurant-owner, Nandkishore Khatri, takes a fancy to this umbrella and attempts several times to buy if off of her - in vain. Then one day while tending to her two cows, the umbrella goes missing. The entire village sympathizes with her. She suspects Nandkishore, and the police turn his house upside down but are unable to locate the missing umbrella. An embittered and upset Nandkishore orders a red-and-white Japanese umbrella and, in turn, becomes immensely popular with the local villagers as well as with tourists. The question remains: where did Biniya's umbrella disappear to, and will she ever ...