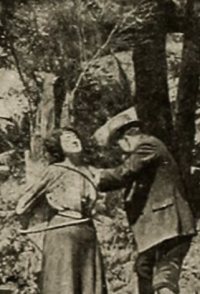 Edgar Dalmore, an impulsive youth, quarrels with his father, and in the heat of anger is disowned. Edgar's cousin, Vincent Lennox, is hard pressed for money, owing to his gambling proclivities. With aid of his friend, John Sterling, he beats Edgar's father into insensibility, robs the safe and accuses Edgar of having committed the crime. The father dies, and Edgar is sentenced to prison for life. At the end of six months, Edgar escapes from prison. As an escaped convict, he is welcomed into the Hellville band of bushrangers, made their captain, and called "Captain Midnight." He leads his band on several daring adventures, including an attack on and robbery of the government gold coach. After a thrilling chase by the bandits, the escort of the coach are overpowered and the chest of gold stolen. The mounted police chase Edgar and his band, and Edgar is separated from the bushrangers. Edgar meets his sweetheart, Thelma, who prevails upon him to renounce his bushranger connections. Elsa ...

The Avenging Conscience: or 'Thou Shalt Not Kill'
Total votes: 1,086
Average rating: 6.5