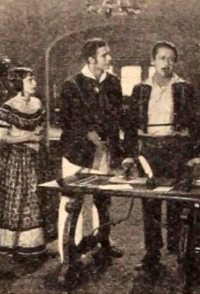 Because of his financial trouble, Don Almeda (Noah Beery) promises his daughter, Maria (Barbara Bedford), to Don Alvarez (Albert Prisco). But Maria does not love Don Alvarez, and, in fact, she falls in love with Terry O'Neil (Elliott Sparling), a stranger who has been wounded by robbers associated with Alvarez. O'Neil takes Alvarez's place at a masked ball. Alvarez, in turn, robs the old Padre (John Herdman) of some pearls and stabs him to deal with O'Neil's knife. He then accuses O'Neil of the murder and tries to shoot him, but wounds Maria instead, because she has thrown herself in front of him. Maria recovers, and, after proving that Alvarez is a thief and a killer, weds O'Neil.