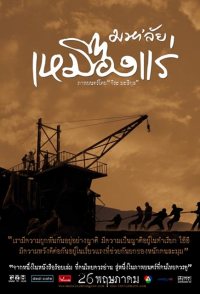 Set in 1950 and based on the series of autobiographical short stories by Archin Panjabhan, the beginning finds Archin (Pijaya Vachajitpan) expelled from Bangkok's Chulalongkorn University in his sophomore year. He is packed off to southern Thailand, where he has supposedly has a job waiting for him. It's in a remote, mountainous jungle that doesn't even "rate a spot on the map", a place that is little but all-consuming red mud and seemingly endless, torrential downpours. Archin arrives, letter of recommendation in hand, at the mining company office, only to be told that there are no jobs. The company's superintendent, Sam, a stern Australian veteran of the Death Railway who asks Archin if he is willing to do manual labor. Archin answers to the affirmative and he's hired. He's even given a house of his own, (which happens to haunted). Everyone, from the lowliest Malaysian laborers to John, the burly chief of the mining staff, derides Ajin as a "Bangkok boy" who isn't fit for hard work ...